MapReduce is a programming model that allows processing and generating big data sets with a parallel, distributed algorithm on a cluster. It allows for massive scalability across hundreds to thousands of servers in a cluster.

This all sounds like a very complex algorithm, but in fact it is just a complicated way of saying we are cutting up the workload in smaller parts, and the concept of a MapReduce task is actually easy to understand.

It basically consists of two parts: the mapping part and the reducing part, hence the name MapReduce.

In other words, a MapReduce implementation consists of a: 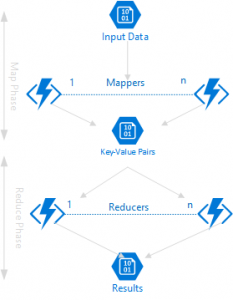 Since Big Data is (still) very hot at this moment and MapReduce is at the heart of distributed computing, Microsoft Azure created a hands-on lab around the concept of MapReduce in combination with their serveless offerings to make it easy for developers to implement a MapReduce job.

Durable Functions manages state across checkpoints and restarts for you, so you do not have to worry about having to implement your own way of keeping state.

This is a great feature if you want to process a workflow in parallel, such as MapReduce. Especially if you combine this with calling functions asynchronously, as not all of the tasks in a MapReduce job will complete at the same time, but you are going to need all the output before you can aggregate the intermediate results. This is where the Fan-out/fan-in pattern comes in.

The Fan-out/Fan-in pattern will distribute the work across multiple instances of a function and then wait for all the results to complete before aggregating the results and proceed to the next step.

Canviz is proud to have developed a lab around MapReduce and Azure Functions for the Microsoft Azure team.

Be sure to check it out and if your organization needs expertise implementing Big Data solutions, please to contact our team!

how can we help you?

Contact us at the Canviz office nearest to you or submit a business inquiry online.